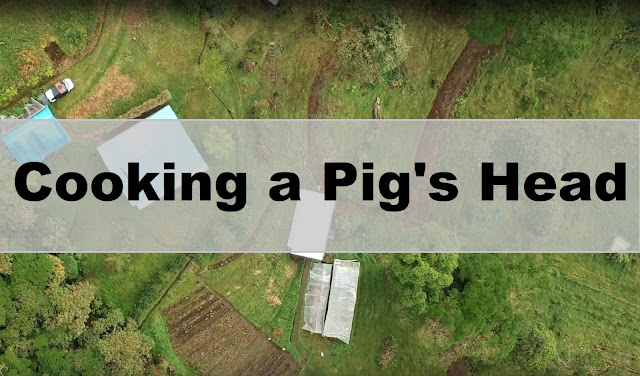 Somewhere along the road between the ADE farm and Cares21, Tomas turned to me with a smirk on his face and asked, “Do you want to cook a pigs head!?”  This was an unexpected question for sure.  It’s not everyday that you get asked to cook the ‘other bits’ of meat that usually don’t make it into a grocery store.

I had known that we were hauling a bunch of meat in the back of our van.  I had helped hang the pig up and watched as it was slaughtered earlier that morning.  Then later, carried up slabs of meat, wrapped in black trash bags, to store in the deep freezer like I was some sort of Irish hitman.  What I didn’t know, was that in one of those five or so trash bags was stowed the entire head of a pig.


I agreed, of course, even though I had never actually cooked a pig’s head before, and suggested that we cook it in the ground.  I have had experience cooking things underground during my time in Madagascar, mostly turkeys and geese, and figured how much different could it be. 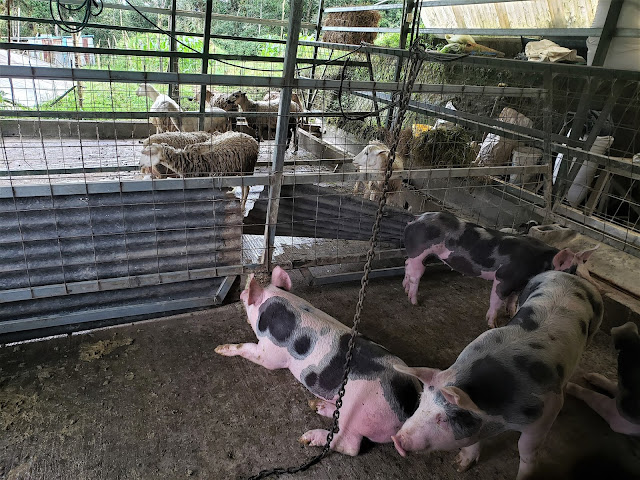 Behind my pig’s head stands the ADE farm.  The ADE farm is based on sustainable farming practices and is ground-zero for everything we do.  Not so much a place for large-scale production; the farm situates itself as a center for research and learning of sustainable practices.  Part of those practices is using every bit of production.  Whether that be in the use of organic waste as compost, turning animal excrement into usable gas, or the eating or selling of every part of the animals that are harvested.  In the end, those of us that call ADE home, and many of those around us, get a true authentic farm-to-table experience; as our pig was also in the process of experiencing.

Cooking underground is an age-old way of cooking, but it is far from the easiest way of doing it.  It is a slow process in every aspect.  It takes considerable manual labor, planning, and time commitment (a lot of it).  But the results of the process far out way work.  What you are left with is a meat so tender that it falls off the bone. 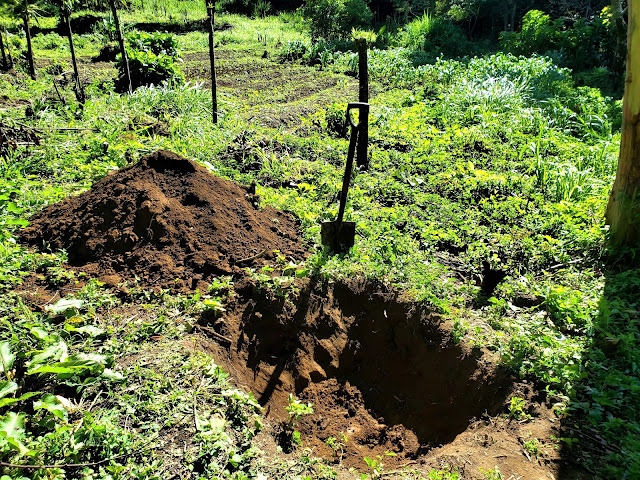 Starting early Friday morning I began with the digging of the pit that would become the oven in which we cooked the pig head.  You have to dig it fairly big, about a meter wide and deep, so that you have enough earth to insulate the coals.  The work was easy at first, the area had once been a coffee farm, but about halfway down the ground became more packed and harder to move. 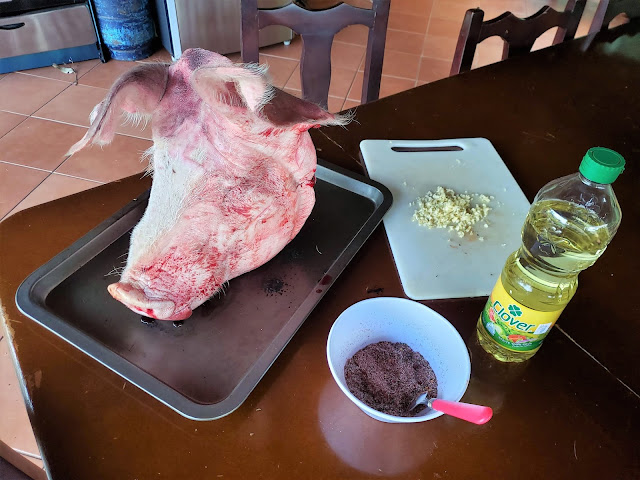 We had decided that we would cook it overnight, so that it would be ready for lunch the next day.  So, my next task was to prep the head so it had time to marinate in the seasonings before entering the ground.  To do this I had to first remove the hair from the head and the easiest way is to simply burn it off.  Once the majority of the hair was gone, I lathered the head in a thin layer of oil, mixed an array of seasonings and herb, and applied them to the head. 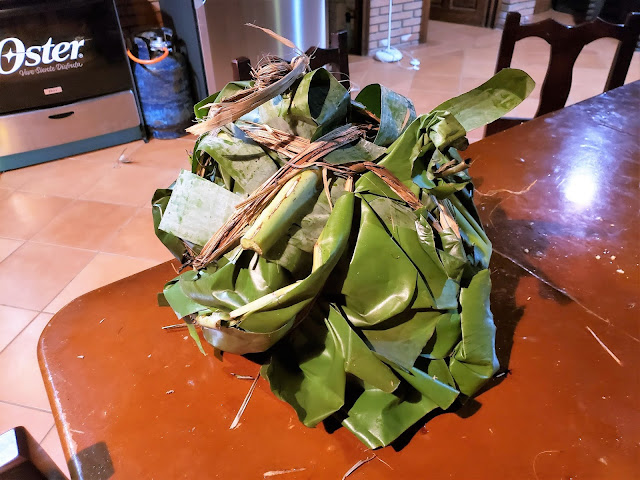 Seasoning the head might be the last thing you would do if you were cooking it a more modern way, but for the ground the head needs to be wrapped.  For this I used a more traditional method of wrapping the head in banana leaves.  This not only protects the head from the dirt, but it also traps in the juices and adds a little flavor as well.

While the pig head sat wrapped in its blanket of banana leaves, I set off to start the fire that would provide us with the coals we needed to cook with.  This was one of the easiest and more fun steps of the process.  After starting a small fire in the pit I had dug earlier, we continued to throw in trunks and branches of dead coffee and cypress trees.  This began the first long time commitment of the process.  The fire soon turned into a bonfire and we sat, not too closely, and watched as it slowly burned down and left nothing but red-hot embers. 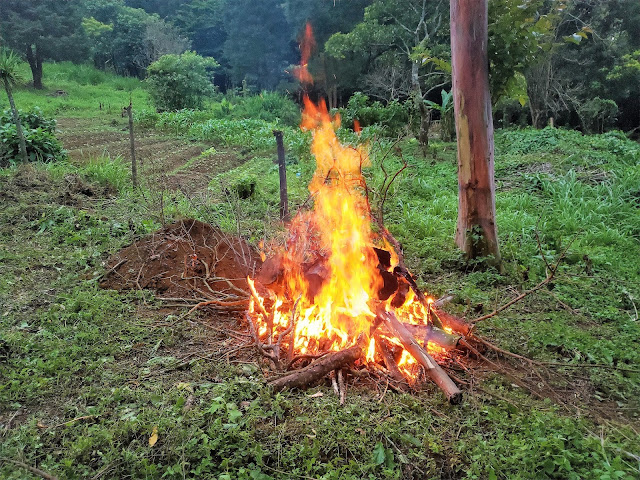 Once the fire had burned down, it was ready to cook the pig head.  To create the stove, we raked a layer of embers aside, sat the wrapped pig head on top of the remaining embers, raked the layer of embers back on top of the head, and covered the whole pit with dirt.  This whole process has to be done relatively quickly so that the coals get starved of oxygen and do not begin to burn the meat.  That quick process is then followed by a very long one; 15 hours of overnight cooking. 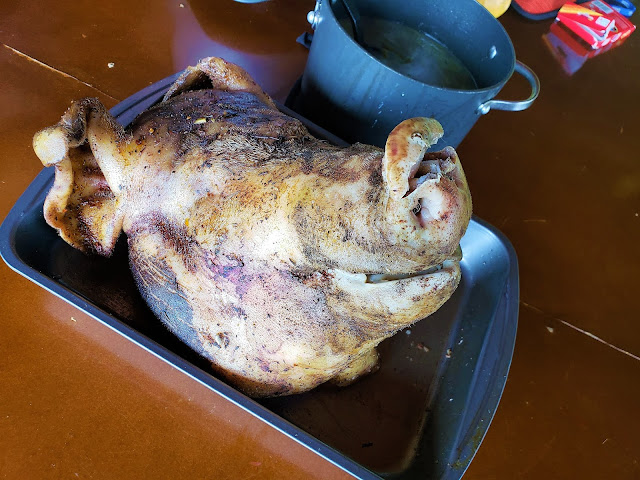 At 11 am Saturday morning. I returned to the pit, happy to find that it had not been dug up by coyotes during the night.  I carefully shoveled away the dirt until I found the ball of dried banana leaves hidden within.  Removing the leaf wrapped head, still hot from the coals, I took it to the kitchen, and away from the praying eyes of our dogs, to unwrap it.  Layer after layer, the leaves turned from dried and crispy to soft, and began to release the juices and steam they detained inside.  Once removed, the fully cooked head of the pig was revealed.

Sitting the head on a baking sheet, we joined it with the rest of the food dishes.  As we all joined in around the table, we began to cut away pieces for each person and enjoy the farm-to-table experience.

Have you ever cooked or eaten a pig’s head?
What was your truly farm-to-table experience? 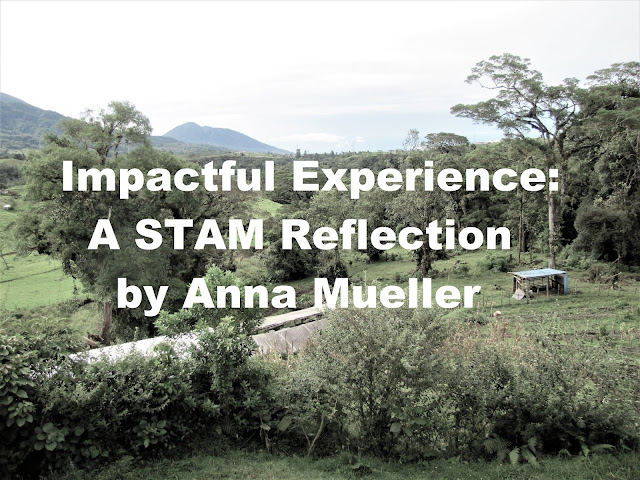