As a college student, the value of independence is constantly being emphasized to me. Two years ago as I began my freshman year, I felt like I was heading into the rest of my life. It was my first time being away from my parents for a long period of time, making all new friends, and studying whatever subject I chose. I was growing up, taking my first steps out of childhood and into adulthood. I never would have guessed that two short years later, I’d be spending my summer in Costa Rica working with ADE.
Before making the decision to intern with ADE, I had my doubts. Most of these doubts stemmed from the fear of the unknown—what it would mean to drop everything and everyone from my life in the US and come into an entirely unfamiliar community, even if it was only for two months. What if my host family didn’t treat me well? What if the work wasn’t what I thought it would be? What if there was no way for me to run and exercise, causing me to be unprepared for the cross country season in the fall? My parents’ protective attitudes only added to these fears. “We don’t want you to run alone in an unknown neighborhood,” they warned me. The list went on. “Host families are very risky, you never know who you’ll be living with. There are so many other worthwhile opportunities in the US that would look great on your resume. You could intern with a government agency in DC or with an NGO in New York City. Why ADE? Why Latin America? Why Costa Rica?” Of course, I understood where they were coming from. They are my parents, after all. Naturally, they had a fear of sending their daughter into a region unknown by them only to be taken in by strangers. But despite these doubts, my heart was set on ADE.
Never in my life had I taken a risk that did not have the support of my parents behind it. Still, after many months of prayer and discernment, I felt myself being called to Costa Rica. When I bought my plane ticket, it felt like the ultimate act of independence—going alone into a new country with a different language and different culture. My parents, although finally convinced that I was not going to die if I spent the summer in Costa Rica, would not be just a car drive away as they are when I’m at school. My twin sister, who I’d never been apart from for longer than a week in my life, would be staying back in the US. There were no safety nets. I tried not to overthink it as I waved goodbye to my parents at the airport and was suddenly left alone, ready to embrace my independence. Or so it seemed. 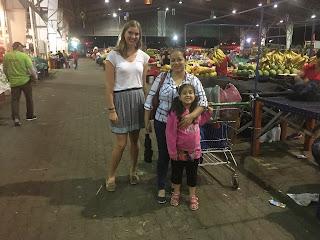 As soon as I landed in Costa Rica, I felt like a fish out of water. Although I’d been taking Spanish classes at school, the pronunciation and speed with which everyone spoke made the language sound entirely unfamiliar. As a six foot tall white gringa, I stuck out like a sore thumb. Tomas and my host family were there at the airport to welcome me. Tomas explained that I would spend my first few days with my host family and not with the ADE staff because, like a baby duck who attaches to the first thing she sees, the best way for me to adjust to the culture was to build an immediate attachment to my family.

Freeze. Here I am, ready to embrace my life as an independent adult, and I’m being compared to a baby duck? Something didn’t add up. But in the days and weeks to come, I found that not only was I less independent than I’d anticipated, but I was feeling more dependent on those around me than I’d felt in many years. Being in an unfamiliar city combined with the lack of addresses and street signs meant that I couldn’t go anywhere by myself. Rather than choosing what and when I wanted to eat, my host mother prepared every meal for me and even packed me a lunch every day for work. With my limited Spanish, I had to rely on the kindness and patience of others as I tried to get my points across.
Automatic red lights were going off in my head. I felt like a burden to this family that had so graciously taken me in. I wanted to pull my own weight, to repay them in some way, but my lack of grounding in the local context made me unable to do so. Finally, I submitted myself to this feeling of dependence. And a strange realization came over me. By admitting my need to rely on others for even simple everyday tasks, I found that I was better able to express my gratefulness to those around me. I was surrounded by people who not only were willing to help me adjust to this new life, but who genuinely wanted to help. By accepting their help, I was showing gratefulness and respect for the lives that they live.
This reflection made me think of John 15:5, which the ADE staff discussed a few weeks into my internship:

“I am the vine; you are the branches. If you remain in me and I in you, you will bear much fruit; apart from me you can do nothing.”

Admitting dependency does not necessarily signify a lack of independence; in fact in many cases, independence and dependence go hand in hand. In order to follow the word of God, you need to trust in Him rather than the external pressures of the material world. In this way, you need to assert your independence from societal influences in order to embrace your dependence on God. Coming to Costa Rica was an adventure that I took on independently, but only after admitting my dependence on those around me was I able to fully relax into my life here. 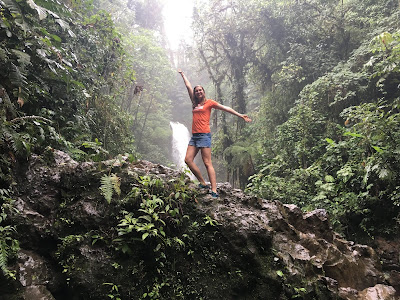 This is only one of the ways that my expectations and comfort zones were challenged during my time in Costa Rica. The list goes on and on. I came to Costa Rica wanting to understand what it’s like to live and work in a Latin American country, and looking back that’s exactly what I’ve learned, although the process was different than I’d expected. Rather than being shocked by glaring disparities from the US, the process of spotting cultural differences was slow, gradual, and continuous. This allowed me as well to realize my own ingrained expectations regarding material things, everyday processes, others, and myself—expectations that never would have become apparent to me had I not separated myself from the context that created them. For example, growing up and becoming my own person does not equate to independence from those who love and care for me. Rather it is a much more complex process that requires both the courage to be independent as well as the humility to admit that you can’t do it all alone.