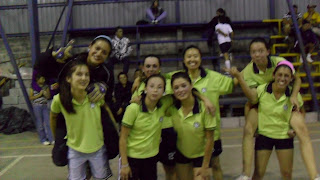 We had our first win this week against a team from Los Cartagos, a neighboring village. The team wore their ADE high school uniform polos and were pumped to play! We had 6 high schoolers (Daniela, Gabi, Sandra, Nadia, Katie, Nanka) and were scrambling for substitute players till the last minute. A neighbor mom who used to live in the city who is also a stellar player was invited. And I, Chelsea, a teacher and mom was even asked to play out of desperation. The age limit was from 12-99. So I fit, being under 99.

Shouts and cheers were loud and booming from the benches from the high school and community when our girls scored 4 goals. People were buying hamburgers, enjoying watching the game and greeting their cousins, neighbors, and friends. It reminded me of our spontaneous family soccer games during Thanksgiving back in the States. Having been a soccer family in the States, I remember all the driving, all the gear, the practices, 2 games a week, the strategies, the drills, the intensity, the competitiveness, the Gatorade. Here in the rural area, the games have a different feel. Perhaps because the games are very few and there are not a lot of other activities, these times seem special and incredibly fun. No one is yelling from the stands, just me. I did not shout for a moment and realized that it was pretty quiet. It is definitely clear that it is only a game. Kids in the community do not worry so much about winning- just having a good time with others is enough. When we play soccer here we laugh more than get frustrated. Our ADE girls team even have funny reputations. I have the reputation of always getting hit with the ball. Sandra, always kicking people. Daniela always giving 150% and falling down at least five times at every game. Looking from above, our games against each other after school look more like a pin ball game with the ball hitting the ceiling and all parts of the walls randomly inside the little concrete gym. With ADE's model to use the resources that are already in the community to do development, we are grateful to the community for the use of the gym. We have fun and kids always beg to play more.

The girls and I along with many family members packed into our van arrived a little early so that we can finally meet our 'coach' (right before the game) to talk about positions. He could not make it. No matter. Nobody stressed. My husband Tomas stepped in and offered some positions. I suggested we kick the ball a little and maybe stretch. Another guy comes to offer assistance. He looked at us and was with us 100%. I don't think I ever heard the sound of his voice but you could tell he would be with us no matter what. It was all the girls needed. A whistle and a ref were found and we started. Girls did not want to come out of the game to give everyone a chance to play but did it cheerfully when asked. I played for a good 15 minutes and between breaths begged my husband to take me out. Final score 4-1. 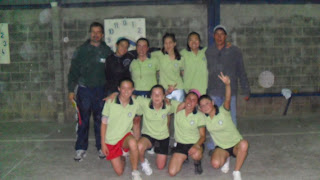 Most of our high school students play after school so the girls have had plenty of practice playing against the bigger boys. Our beloved students are also not shy of physical labor- they are used to helping out with house and farm chores from a very young age. We even clean our high school everyday! I was looking at Gabi, one of our players, one day and noticed that she had guns on her arms. I like to think that I have some guns on my arms- but I like to work out with weights. Gabi no doubt gets hers from helping her dad on the strawberry farm, walking so much on the hilly mountain terrain and just plain hard work around the house. I will have to try her way more since there is no workout gym here :)

Most of our beloved students worked before the high school opened and were not in school. Soccer though a Latin America sport, has not been so accessible for kids in this rural area. There has never been a league in the area for youth nor too many girls who play any sports. ADE hopes to see people from neighboring communities offer more to the youth who do not have extracurricular activities. What a vast contrast it is from the States where there just was not enough time to squeeze in all the after school activities. We hope for a youth group and some sports leagues to start- a time for kids to be kids, just play and have wholesome activities. If you would like to help coach a league even if it is just once a week or do a sports camp or know of anyone who would love to participate with us to love the youth in the community, please contact us!

With the formality of forming actual teams and playing against other teams, we are starting to do more drills and perhaps our practice games will start to look less like pinball..it doesn't really matter. When I think back to meeting the girls when we opened the high school 2 years ago playing badminton outside in the grass next to the river where the high school used to be, I remember all the girls allowing the boys to play and not even thinking about playing. I see them now kicking and going after the ball with everything that they have and loving it. Some fall and have bloody scrapes on a consistent basis. Our girls are very feminine but they accept their scars with pride. I remember asking one of the girls one day why she was not playing with us after school. She said that her mom forbid it because she would get bruises on her leg and she had to wear a dress in the weekend for a special event.

The boys team however got creamed. With Ben and Tomas and several others from the community on their team, Jordan, Jesus, and Samuel gave a valiant effort. The other team seemed pro and have competed together for a long time. One could easily see the stark contrast with official uniforms on one side against our team with random shorts, jeans even, boots, and other nonathletic shoes. It was not a surprise to me. I have seen people play from our teams in socks in the rain but such heart. I at the last minute offered my tennis shoes to a boy who came with cowboy boots. It sort of fit and he just beamed playing. I walked around in his big cowboy boots in my ADE soccer outfit. No one cared. At least I don't think so. I jumped every time the other team kicked because they kicked that hard. Our high school boys-Jordan, Jesus, and Samuel did well to keep up and even score a little. The score was being kept on two round poster boards on the wall with a rotating needle that pointed to numbers from 0 to 9. Our boys team got lapped and the score ended up being 1 them, 2 us. Even if the score really was 11 to 2, we joked with everyone that we indeed won, 2-1.

Congrats to our girls team-undefeated so far. 1-0! Though winning is thrilling, everyone agrees that we more excited for the chance to see more youth and communities come together around soccer.
Written by Chelsea Dozier
Email Post
Labels: Community Local School