‘Tropical Agriculture & Missions’ (TAM), offered since 2003, was taught in Costa Rica for the first time. Eight students from five schools were enrolled, and a Costa Rican student sat in as well. Typical of the TAM course, they were a fantastic class to teach, most already seriously considering service as Christians in poorer regions of the world. They were hard-working, but also a fun group, too, very adventurous, quickly bonding, and patient with delays in the schedule. 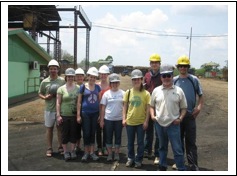 About two of the three weeks were based in a town called Vara Blanca. At  6,000 ft, temperatures were in the 50s-70s, and it rained heavily, often daily. Our collaborator, Eastern Univ. alum Tomás Dozier, grew up in Vara Blanca, returning with his family after an earthquake in Jan. 2009 killed dozens and left many homeless. After the initial relief work, a community survey revealed that a high school was a high priority. Tomás and Chelsea Dozier formed ADE (Association for Development through Education), and began a HS. They and a small staff, mostly alumni of Eastern University’s graduate program in Intl. Development, are also involved in the one evangelical church in the area, and sharing their faith in the community. ADE has long-term access to a cabin in a primary rainforest that is ideal for an Au Sable class, and they facilitated visits with farmers, research centers, national parks, etc.
Besides units on the scientific foundations of sustainable agriculture, basic tropical ecology, and some missiology, we visited farmers, and observed the upland rainforest and regional geology of Vara Blanca. That includes the effects from the very live Poas Volcano, 10,000 ft high, and close enough to us that we could drive to visit the billowing crater in an hour.  The first week, groups of the HS students gave presentations to our class about the types of agriculture in the valley (strawberries, dairy cattle, some dairy goats, trout, and ornamentals, especially potted ferns, for export to the US).  The third week, groups of Au Sable students gave seminars to the HS students, each covering a plant family – its basic botany and agricultural & nutritional value. Two Spanish-speaking students within the TAM class got to try their translation skills, too! 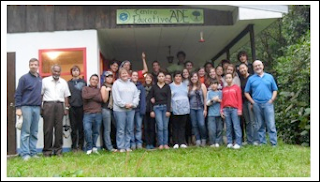 Although this was the trial run of TAM in Costa Rica, response of the students was positive. Besides class units and visits with farmers in greater Vara Blanca, Costa Rica offers world class research and teaching institutions.  Ones we visited for orientations included CATIE (Centro Agronómico Tropical de Investigación y Enseñanza), an international research center established in 1940, governed by a board from 14 Latin American countries; EARTH University, an international university founded in 1990 to train students in environmentally sustainable tropical agriculture, with an emphasis on hands-on practice and business training, and a student body of 400 drawn from across the global Tropics; OTS La Selva Station (Organization for Tropical Studies, founded in 1968 by a biology research consortium, located in a lowland rainforest that receives 4 m of rain a year, and abuts one of the largest national parks in Costa Rica, that ascends to peaks ca. 10,000 ft high); national park visits that included Poas Volcano (looming over Vara Blanca), the Arenal Volcano area, Cahuita, a Caribbean tropical maritime forest near the Panama border; and CoopeSarapiqui, a fair-trade coffee-growers cooperative that exports to North America and the European Union.
Educationally, doing the class in CR seemed successful. It was harder to cover certain science units, but other topics were facilitated by living in a rainforest, in walking distance to small farms owned by hardworking, poor families. Spiritually, I was blessed how my students quickly made friends in the community, volunteered to clean and cook, and, in some cases got in significant discussions with neighbors about Christ and about life in Vara Blanca. Like all small towns, there are many dynamics going on in VB. Attending a tiny church with limited resources was also a good education about Christian ministry: I trust many will remember to pray for that little church. They invited me to preach one Sunday, and I did, in Spanish and English!  And then there are those unplanned conversations and prayer times that God seems to arrange when we’re not looking: ask me about some of our stories. 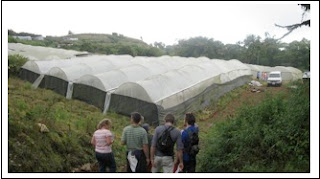 Thank you also to those who prayed for this course.  All went so well, and we pray that God will use this course in the lives of the students who took it, too. It will be exciting to learn where they end up in years to come! God willing, I am hopeful Costa Rica may be a good long-term home for the TAM course, and perhaps other Au Sable classes, too.
Please pray for Dave Unander, in Torino, 2 Jul – 6 Aug 2011
Well the Old Guy is no sooner back from Costa Rica in the Tropics, than he’s on the road again to the Mediterranean. I can’t believe it, either! Eastern University is sending me to Torino (also known as Turin sometimes in English), for work on several tasks related to our new study abroad option there.  My next door neighbor wants to know how to get this job… 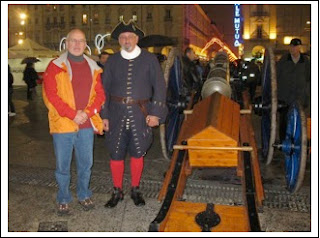 Torino is a big city of more than a million, but thus still much smaller than Philadelphia. As you can see, the Alps form a circular arc, drained by the Po, Italy’s largest river. This fruitful valley, fed by whitewater rivers coming down from the mountains, has been a prize in numerous wars, and for millennia, the source of great wealth in Italy. It’s a fascinating city to wander around is, as I did back in my November trip here. This time, I have more tasks to complete, but as part of the deal, I have also been offered intensive Italian lessons.
What do I desire prayer for?  Well, first, I do ask for your prayers for my protection and good health, and that I’d do good work on the tasks I have. It’s a big responsibility they’ve handed me. There also is a certain amount of drug-fed crime in Torino, as in most of the world today. Safety anytime I’m around an Italian highway sounds funny, but it’s got a serious side. One of the students at a study abroad program from a Christian college I am acquainted with was recently killed on foot by one of those crazy Vespa drivers, for example. 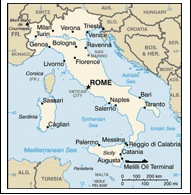 Most importantly, pray that I’m a good testimony for Christ. In November, I had several conversations about Jesus with colleagues at the university. I pray God gives me wisdom how to continue these conversations, and others that may develop.  I’m on my own for five weeks, and desire to find Christian fellowship, too, (perhaps in Italian Italian rather than English, since I’m trying to learn Italian, but we’ll see what happens). Italy is an incredible country, but there’s also a lot of spiritual darkness, and, really a huge spiritual vacuum right now. Please pray for Italy! It seems like they are at a sort of crossroads, centuries of enforced tradition have rapidly eroded in decades, for both good and ill. And pray I discern what I’m supposed to do with any fluency in Italian I may achieve through that language course. Thanks!
In Christ,