By Leigh Anne Coble
Vara Blanca hosted it’s first feria de fresa (strawberry fair) this past Saturday and Sunday and everyone in this community and surrounding communities came out to participate, in two days full of music, activities, and – of course – strawberries.  The steady rain over the weekend did nothing but churn up the dirt and, in the greyness of the day, make the strawberries seem even more fresh and red.  The local folks meandered around, a father holding his daughter and a bag of strawberries, a young boy with his face painted like a tiger running through the mud.  If you walked past the mouth of the gym, you could hear shouts of children playing soccer and reggaeton blaring from the stereo.  Both days of the  feria de fresa were full of noise, laughter, ripe strawberries, and the bustle of people coming together as a community. 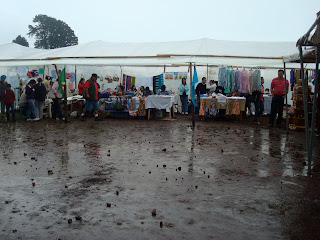 The feria was set up on the hill outside the gym, a central place in Vara Blanca.  To the left side of the gym under a large white tarp, people were crowded together eating at tables or packed in lines for strawberry chocolate cake, hot soup, chicharrones, steaming fajitas, tamales, and hand-ground tortillas to mention a few.  To the right side of the gym, local artisans set up tables packed with colorful scarves, hand-painted glass earrings, woven baskets, and more.  An older couple had set up a stand in the middle of it all, their faces as smooth as the hand-carved wooden bowls around them. Another table held wallets, purses, vases, and baskets made with recycled wrappers and the woman who made them offered to teach us her method.  We watched as her fingers expertly folded a silvery wrapper several times.  As my own fingers clumsily repeated her steps to complete a tiny section of a purse, I gained a great appreciation for the time-consuming, hand-made art around me. 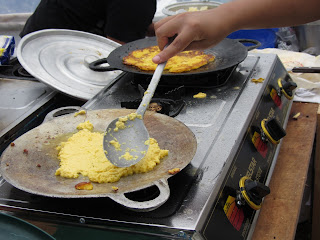 The ADE high school also had its own booth, by the fajitas and the leather purses, where they hosted a dessert-making contest and an eating competition.  For the contest, a man made a dish resembling strawberry cobbler, with Jell-O in the center and took home $60 prize money.  In the eating competition, contestants had to slurp from a bowl of strawberry Jell-o on the table with their hands behind their backs.  In the championship round,  Tomás Dozier battled a stocky man and two other women, but ended up winning nothing more than a sticky face.  (The other man walked away with his prize of $40.) 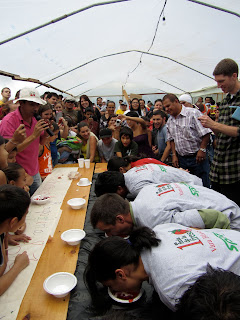 Following the eating contest, was one of Sunday’s most popular events, the guerra de fresa (strawberry war) put on by the ADE high school.   Nearly half of the crowd came down to the field to watch the two teams chucking strawberries, just soft enough to be considered rotten, at one another while hiding behind wooden barriers.  Almost all ages were represented in the guerra, from young boys wrapped in plastic bags and wearing goggles, to several high school students, to older adults.  It lasted for nearly half an hour, and no one seemed to mind that in the middle of it, the sky opened and soaked everyone.  A man from Channel 7 News came out on the field when it ended to interview two women from the guerra, both of whom still had clumps of strawberry in their hair.  Just as he began asking questions, a misaimed strawberry came flying and squished onto the side of his expensive camera.  He yelled at the boys responsible, but it seemed no one could get enough of the war; within five minutes, another guerra began. 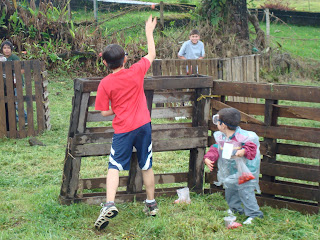 Although many people left the feria with fewer colones in their pockets, rain in their shoes, and strawberry stains on their clothes, a good time was had by all.  The town’s first feria de fresa gave local businesses a chance to showcase their products and gave the people an event to remember. 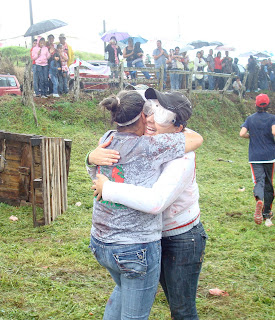