Potential Board Members and Short History of ADE

Written by Leigh Anne Coble
This Saturday, the ADE staff invited potential board members to visit Vara Blanca and come together for fellowship, discussion, and a hot lunch at the restaurant Arco Iris.  Not including the five permanent staff members of ADE, the three summer interns and five students from the high school, there were eleven people, some who drove up to the small town all the way from San José, about an hour away in car.  Potential members included a woman who recently presented at the local church about the church’s role before a natural disaster, a man who lent a van to ADE for the past 2 years, and many others. 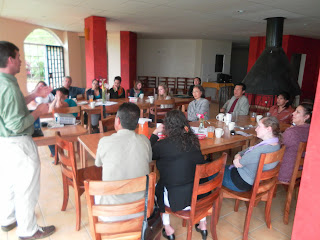 After everyone was pleasantly full and sipping coffee, Tomás Dozier opened the discussion by introducing himself, describing his position with ADE, and his favorite animal and why.  Each person followed suit, favorite animals ranging from an eagle to a jaguar to Kiku, Ben and Frances’ small dog.  Chelsea explained how we can use our favorite animal as inspiration, as a way to see the qualities we admire in an animal, whether majesty or intelligence or grace and challenge ourselves to develop this in our lives.  When everyone had spoken, Tomás invited Eric, the restaurant manager and host of the lunch, to introduce himself.  The kind man stood and expressed his pleasure to provide a meeting place, and moved everyone with a story about his favorite animal, the anteater.  He described how these funny, long-nosed creatures come together in a band to miraculously fight off snakes.  “It’s incredible friends, what we can do together,” he told us, his face revealing his sincerity and his desire for the group to succeed.  Then, alluding to the Bible, he assured us that together we can move mountains, and the informational meeting began. 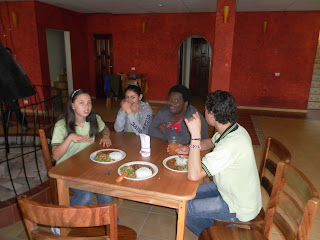 Tomás presented the vision of ADE, telling about his own personal story connecting him to this community where he grew up.  After the Cinchona earthquake of January 2009 struck Vara Blanca and the surrounding areas, Tomás felt that God was calling him and his family to leave their plans in Pennsylvania and come to work with the neighbors he had as a boy.  Chelsea shared that in January 2009, two weeks prior to a Natural Disaster and Mitigation class that Tomas was taking at Eastern University, the earthquake struck, leaving him and his family to ponder on this coincidence to return to the community; Tomas's professor and class in fact came down in April 2009 to do a practical investigation which they gave to the government. Tomás then explained how ADE started to form summer of 2009 (Their son created the name ADE.) They wanted it to focus on education and created a term of zero down model, emphasizing that development can be started with the creative and joint efforts in the community without outside funding. Although some of the sustainable projects may serve a globalized community, the effort and work are in the community. Tomas and his family came down to Costa Rica September of 2009 and worked with locals trying to find sustainble ways to support themselves while opening a high school. ADE staff slowly started to form. A neighbor allowed Tomas and Chelsea the use of an abandoned house to start school and a kind Korean businessman donated a van for them to use. ADE finds its strength working and creating sustainable projects within the community using the resources that are already here. (The most important resource being people.) He stressed the importance of trying to have a model in which others may do the same to respond to other areas using the zero down model.  He  further emphasized that ADE is striving to work with the community and the great hope it has, in particular for the students that are at the point of graduating who will be future leaders. 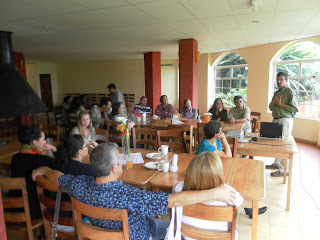 In the past two years that the organization has been in existence, they have hosted several internships and academic groups, the most recent being the Tropical Agriculture and Mission class that came for two weeks at the end of June.  ADE has also founded an international board, a bilingual school, has reached out to local businesses, and is now forming a board in order to be recognized as a legal organization.  The staff plans to continue to work with the local community to also serve a glocal (global, local) community.  The guests seemed interested in the vision of ADE and asked several questions about the nature of the board and the future of the school.  Tomás, Frances and Chelsea then took them to visit el salón, the community center, that has been offered to ADE as a classroom for grades seven through nine, as well as a senior class.  Two students shared about what the high school has meant for them, saying that they would not be studying if the school did not exist. Gabi, an eighth grader, shared that she continues to work on only on weekends and commented how the math that she has been learning at school has helped her at work.  Ninth grader Fabian shared that he still does not know what he wants to study in college.  For all of the students, they are the first in their families to go to high school and hopefully onto college.  Tomás ended the time sharing about the plans that ADE has with the community's Board of Development to seek grants in Costa Rica to remodel the community center.  Everyone walked out together with Tomás' last words lingering in the air, asking everyone to spend time to consider being a part of the organization.
Email Post
Labels: Background Board Development History of ADE